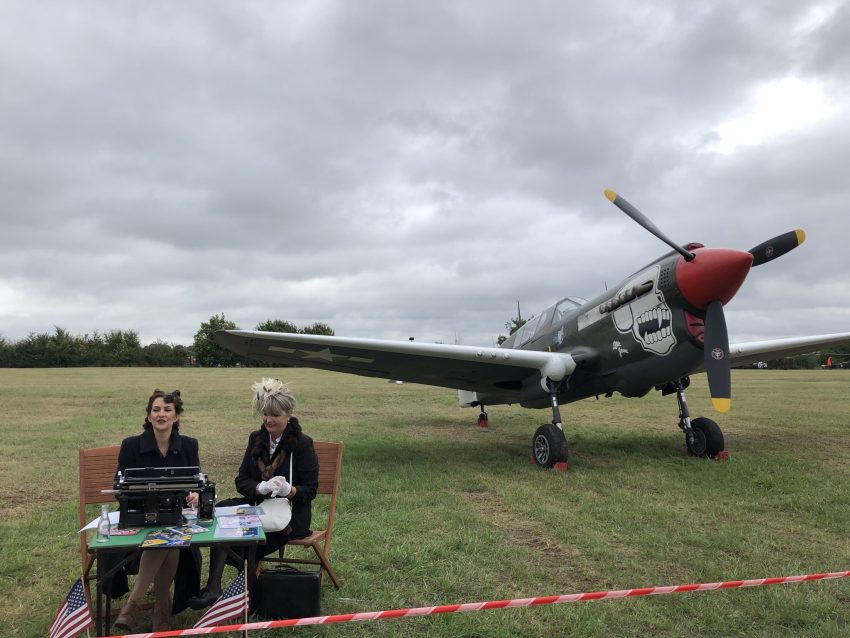 The meetingpoint to start this weekend: Alex’hanger…but where is that? No address and due to the preparation of the Air Legends fly-in, the airfield was closed for the public. Luckely, Beate Bock, the wife of Michel Bock, President of IFFR France had figured out a solution: a local, authentic French café that served us a very nice portugues lunch…in Ile de France 🙂

With the presence of the current World President Georges Ritchie and no less then 3 Past World Presidents, the total list of attendees was about 60 persones in total. Drop by drop, all participants reported present during lunch, except 2 people who remained ‘missing’. For IFFR Benelux, Ingrid, Dirk and Mia attended the French section fly-in for the first time. The members of the IFFR France were very pleased with our attendance and were also a bit surpriced how easily we switched languages from English to French and back… a real icebreaker. After lunch, the group set of by to visit the Chateau Vaux-Le Vicomte. And surprice, surprice: Han & Gienneke of IFFR Benelux were waiting for us at the gate of castle. Finally, the group was complete.

The château is a 17thcentury masterpiece, situated in the village of Maincy, is remarkably well-preserved and houses an exceptional collection of furniture, tapestries and works of art. The Château’s splendour provided the inspiration for the famous Palace of Versailles. Especially the kitchen and the basement were impressive and it was interesting to learn more about the life of the staff. It was like opening the door of a world like  ‘Upstairs, Downstairs’. The visit of garden wasn’t possible due to the heavy rain. So it was time to return to the hotel in Fontainebleau, a 45 minute drive by bus.

Saturday, a full day of flying
The airshow ‘Air Legend’  at the airfield Melun was Offering a solid mix of old and modern aircraft, this year was shaping up to be another great show, but a number of cancellations took a bit of the sheen away. The event was still represented well by the French armed forces and the return of a Mirage 2000 display was certainly a highlight for many aviation enthusiasts attending of Melun.

Foreign participants at the show included Belgian Spitfire SL721 – this Mk.XVI wears the colours of Joseph “Jeff” Moureau’s Mk.IX Spitfire GE-S – an aircraft that was painted on the tail of one of the BAF F-16s at RIAT in 2019. Joseph served with the 349th Belgian Squadron of the RAF during WW2 and sadly passed away last year.*

The Melun airfield is the ‘homebase’ of Alex, one of the newest member of IFFR France. He arranged a very exclusive location to oversee the airshow: the rooftop of one of the officebuilding, next to the runway. This offered our party a exclusive and very ‘close-by’ overview of all the aircrafts taxiing to the runway and a clear view on the entire runway. Only disadvantage of the location: no shelter for the rain and the wind and the catering- & sanitary facilities were rather basic to say the least. What was really super? The staff and pilots of the famous ‘Patrouille de France’ were stationed in the building next to ours…Ideal to have a friendly chat with them as they were waiting for the sky to clear off as James Alexander and Georges Ritchie of IFFR UK experienced.

After the airshow, we returned to the hotel in Fontainebleau to get ready for the diner and a cosy night at hotelbar.

Sunday, a genuine ‘ABC’ day which turned out really great**

On Sunday morning we set off for the visit of the chateau of Fontainebleau. It is one of the largest French royal châteaux. The medieval castle and subsequent palace served as a residence for the French monarchs from Louis VII to Napoleon III. Francis I and Napoleon were the monarchs who had the most influence on the palace as it stands today.[2] It became a national museum in 1927 and was designated a UNESCO World Heritage Site in 1981 for its unique architecture and historical importance.[3]  Really, a discovery and a palace worthwhile the visit.After a crisp walk through the gardens of the château, we gathered up by the bus for the transfer to our next ‘château’ or more a mansion on the French countryside.

The Château de By, otherwise the Musée de l’atelier Rosa Bonheur (“Museum of the Studio of Rosa Bonheur“) is a museum run by the town of Thomery in the French department of Seine-et-Marne, on the edge of the Fontainebleau Forest. It is named after the former town of By, near Thomery. After a really delightfull and cosy lunch, served in the former stables of the mansion, we got a guided tour in the house by the daughter of the current owner. In a very passionated way, she shared with the story of the life of Rosa Bonheur, a French female painter specialized in animals. As a visitor you step really in the life of the painter, as for example her studio is been kept as from the day she passed away.

After visit, we made a quick stop in the village of Thomery for a short walk through the centre and then it was time to go to the Country Club, on the borders of the Seine river for the galadiner. Logically, not ‘formally dressed’ as there was no time to go to the hotel.

On Monday, everybody returned home, mostly by car or by commercial flights.

IFFR Benelux is a group of Rotarians dedicated to promoting Rotary and aviation as an opportunity for fellowship and service.
#iffrbenelux

An impression of the flightline @airlegend.fr wit